When reading the first chapter of Laudato Si’, Pope Francis’ encyclical on the environment, it’s easy to see his deep concern over the condition of the world today. Pollution, over-consumption, the quality our water supply, and the breakdown of human society trouble him deeply. In these last few sections of Chapter 1, we will be looking at the imbalance of resources and how the Pope views our response to the current environmental crisis. 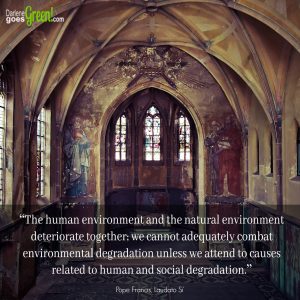 Understanding Pope Francis on Global Inequality
The quote above sums up the Pope’s ideology and thoughts on this section and to an extent, the entire encyclical (paragraph 48). To follow up, he continues with, “In fact, the deterioration of the environment and of society affects the most vulnerable people on the planet,” the poor of of the world. Listing a few examples, he shares what he means: overfishing damages communities without resources for replacement, water pollution damages communities that can’t afford clean water, and rising sea levels force people to leave their communities. Sadly, he shares that he believes this imbalance and depletion of resources is often the cause of premature death of the poor, national conflict, and other global problems.

One-Sidedness by Those in Power
If that isn’t enough, he tells us that although the poor (he calls them “the excluded”) make up the majority of the world’s population, we don’t have very much information on the depth that global inequality affects the them. He even goes as far as to say, “one often gets the impression that their problems are brought up [in international discussions] as an afterthought…treated merely as collateral damage” and they often “remain at the bottom of the pile” (Paragraph 49).

With that being said, Pope Francis seems to blame the “professionals, opinion makers, communications media and centers of power” because they avoid direct contact with the poor and their problems by living in wealthier urban areas. He feels those in power are so far removed from direct contact with the needy that they have developed a “numbing of conscience” and one-sided or limited point-of-view that ignores the reality of the situation. He feels that this one-sidedness and injustice for the poor is often promoted by “green” movement.

He then fills out his environmental ideology by stating that the “true ecological approach” is always a social approach including “questions of justice in debates on the environment, so as to hear both the cry of the earth and cry of the poor.”

Population Control and Over-Consumption
With the cry of the poor in mind, Pope Francis turns to the overpopulation myth and debate. He observes that a reduction of birth rate is often seen as a solution to poverty and international economic assistance becomes dependent upon policies for “reproductive health.” (These quotes are his, not mine. Here, Pope Francis is pointing out that the term “reproductive health” is often code for birth control in order to limit population.) 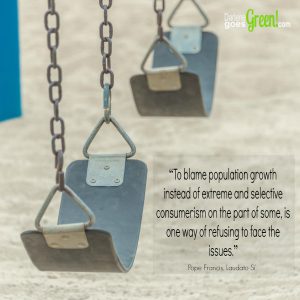 “To blame population growth instead of extreme and selective consumerism on the part of some, is one way of refusing to face the issues.”

He shoots down birth control as a solution by saying, “To blame population growth instead of extreme and selective consumerism on the part of some, is one way of refusing to face the issues” and it is an excuse for over-consumerism. He drives in this point by reminding us that over one-third of all of the food produced in the world is thrown out as if it were “stolen from the table of the poor.” With this being said, he then ends the paragraph with a statement I hope he will offer solutions for later in the encyclical. He writes that we still need to give attention to the “imbalances of population density” because an increase in consumption would cause new regional problems including “environmental pollution, transport, waste treatment, loss of resources and quality of life” (Paragraph 50). 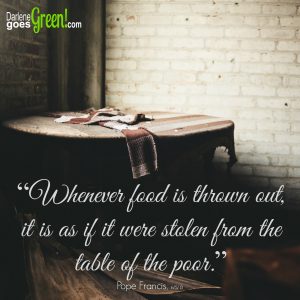 “Whenever food is thrown out, it is as if it were stolen from the table of the poor.”

Continuing in the next paragraph (51), he wants us to look at international ethics and what the Pope calls “true ecological debt.” This ecological debt he says, is the most obvious between what is known as the global northern countries of the world (generally the wealthier, developed countries) and the global southern countries (undeveloped or underdeveloped, poorer countries) and is linked to commercial overuse of resources for extended periods of time where environmental damage is severe. He gives the example of gold and copper mining and how long term production and export leaves mercury and and sulphur dioxide pollution. His concern extends to the gasses produced by the overconsumption of these resources and their contribution to global warming that affects countries like Africa, where he feels the temperature increase and droughts have made farming very difficult.

The Pope believes that the “true ecological debt” is also evident in business where developed countries export their toxic byproducts and waste to poorer countries or improperly dispose of the toxins when conducting business in the less developed world. Here as an example, he quotes the bishops of Argentina to show the negative impact that wealthier nations can cause in underdeveloped countries: “They do here what they would never do in developed countries or the so-called first world. Generally, after ceasing their activity and withdrawing, they leave behind great human and environmental liabilities such as unemployment, abandoned towns, the depletion of natural reserves, deforestation, the impoverishment of agriculture and local stock breeding, open pits, riven hills, polluted rivers and a handful of social works which are no longer sustainable.” He uses this quote to emphasize how extreme this problem truly is and expresses that as he sees this kind of damage happening throughout the underdeveloped world.

In his final thoughts on this section on Global Inequality (paragraph 52), the Pope begins with the fact that much of the world’s natural reserves are located in developing countries and while these countries provide resources to the wealthier countries, they are sacrificing the health of their own land, now and for the future. He discusses the idea that the rich and developed countries need to “help pay the [ecological debt] by significantly limiting their consumption of nonrenewable energy and by assisting the poorer countries to support policies and programs for sustainable development.” 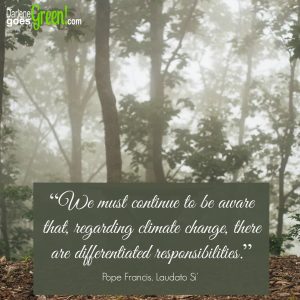 “We must continue to be aware that, regarding climate change, there are differentiated responsibilities.”

He also quotes the 2001 climate change statement of United States Conference of Catholic Bishops who said, that more attention needs to be given to “the needs of the poor, the weak and the vulnerable.” And, in regards to the wealthy versus the poor, he reminds us that “We need to strengthen the conviction that we are one single human family. There are no frontiers or barriers, political or social, behind which we can hide, still less is there room for global indifference.”

What Does It Mean for You and Me?
Like much of Chapter 1, Pope Francis is trying to draw our attention outside of our own experience. He is asking us not just as individuals, but as citizens of a nation to acknowledge and accept the inequality that exists throughout the world and to understand that we can’t ignore and damage other countries for our own benefit. The policies and business practices of our nation can either positively or negatively affect the health of other countries and we must be responsible for our own actions, as well as help underdeveloped countries to implement policies to protect themselves. We need to re- educate people with facts regarding the the overpopulation myth, the dangers of overconsumption, and the damage done by exploiting underdeveloped countries for the advancement of our own.

How Can We Make a Difference?
When looking at global issues, it’s often too easy to ignore the problems of nations and people outside of our own experience. Or even worse, we take on an attitude of extreme nationalism that leads us to believe that we need to “take care of our own” at all costs and let the others ‘over there’ take care of themselves. These kinds of attitudes make a difference, but in a very negative way.

As we have learned so far in these first few sections of our study, to make any real difference towards the problems of the world, now including global ecological inequality, we have to start with changing our hearts, our minds and our attitudes to remember that we, as Christians, are called to care for “the least of these” (Matthew 25: 31-46).

When we align our attitudes with the Christ of the Gospels, it is much easier for us to see that we can’t ignore the ‘big picture’ and be must concern ourselves with the policies and practices of our country. We can, with our voices and votes, make a difference by choosing leaders who also live with “the mind of Christ” (1 Corinthians 2:14-16) and through their representation protect the vulnerable. We must hold our representatives accountable and give them the expectation that global solidarity and concern for the poor is not an option, but a responsibility.

With only two sections left in Chapter one, next time we will look at the Pope’s final comments on the current status of the world’s ecological health. He titles them, “Weak Responses,” and “A Variety of Opinions.” In the meantime, if you’ve missed any of the posts in the study, you can see them all at the Laudato Si’ series page here. 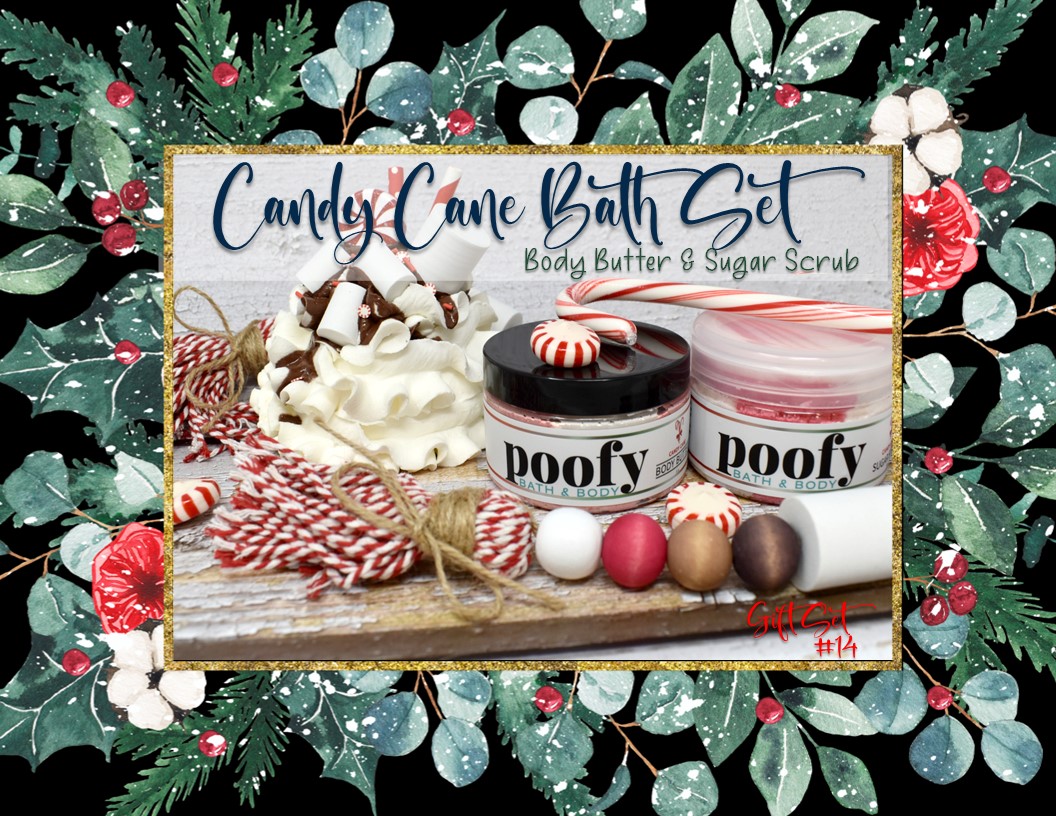 I can’t even tell you how *happy* this makes me